The introduction of the pre-World War II campaign or field hat worn by Drill Instructors today originated during an advisory council meeting in 1956. Senior Noncommissioned Officers strongly recommended the adoption of better “headgear” for DIs.

At that time, the khaki barracks cap had a bill, but didn’t shade the eyes. The soft khaki garrison cap didn’t have a bill, and the green herringbone cape worn with the field uniform was also inadequate in the summer sun. The pith helmet was a practical alternative for wear in the hot Carolina summer. It was cool and its wide brim provided good shade for the eyes and neck. It later became the hat used by marksmanship instructors at the rifle range.

Further study indicated that the field hat was the item most preferred by DIs. It shaded the neck and eyes well, but did not keep the head as cool as the pith helmet. The field hat was a bit of tradition going back to the “Old Corps” or pre-World War II days. It also was more suitable for year-round wear than the pith helmet. By early June 1956, the Depot had requisitioned 1,000 field hats for delivery on Sept. 1, 1956, but General Wallace M. Greene Jr., wanted to order 700 hats immediately. On Saturday, July 21, 1956 at 7:30 a.m. all 603 drill instructors of the recruit training command obtained their new hats.

The Commandant of the Marine Corps announced on Sept. 13, 1996, that all female Drill Instructors were authorized to wear the previously male-only “Smokey” field hat. The commandant’s decision has answered the frequently asked question, “Why not?” It was first asked in 1976 when the first females graduated from DI School and again in 1983 when female DIs began wearing the scarlet shoulder cord. During their Sept. 26, 1996 graduation ceremony, female DI School graduates were issued field hats. A cord retirement ceremony took place Oct. 2, 1996, after which female DIs ceased wearing the scarlet cord and began wearing the cover. The commandant, General Charles C. Krulak, was on hand for the event.

The final scarlet shoulder cord, the previous symbol of a female DI, was placed in the Parris Island Museum. Marines that wear the field hat, the campaign cover or the “Smokey” and train Marine Corps recruits must train recruits by the Drill Instructor Creed. The Creed was written in 1956 by Drill Instructors for Drill Instructors. 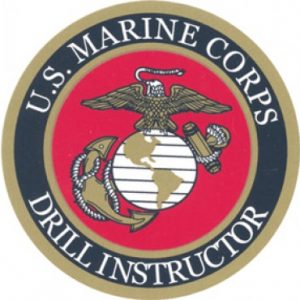